Exactly a year ago my father died in Washington DC at the age of 92. He was there on a mission with the Norwegian army, as part of a delegation to honor, amongst other things, American soldiers of Norwegian descent who had served during World War II. His death was unexpected as he had left Norway reasonably fit for his age. As of the moment we received the call that he was very ill, everything became a turmoil for me. Trying to reach him before he died, getting the message on the airplane on the way over that it was too late and then traveling home with him on the plane was a tough time. Little did we know at the time that this event would also change the direction of our lives.

My father was a veteran of the Korean war, Norwegian UN soldier nr. 2, in charge of setting up the Norwegian MASH hospital there. One of the highlights of his stay in Washington DC was the tour of Arlington cemetery. At this point he was already ill, but he would not let this event pass him by. To me, the most poignant picture from this time, is this one where his image is reflected in the stone memorial of the Americans who fell in Korea. 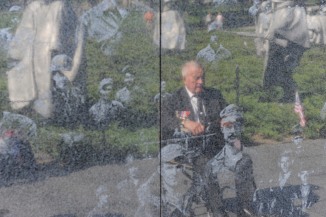 It is an image expressing to me that he was already on his way over.

The funeral was very much the way he would have wanted it. We will forever be grateful to the Norwegian Army for the way they assisted us in every way.

One of my dad’s strongest wishes was for me to take over the farm. Unfortunately he never got to know that his wish would be granted. It was only after spending quite some time here sorting through things that we realized how lovely and peaceful this place is and that we decided to move here permanently.

Dad – thank you for the gift you have given us. Thank you showing us your love for this place and for opening our hearts to its loveliness and to the people who have so warmly included us in their lives. I just pray that you somewhere, somehow, know that we are here, taking care of your beloved Bjørnerud.

We miss you! Your memory will always be kept warm in our hearts.

This coming weekend we will make and drink a Mannerheim’s schnapps in your honor. You always had fun trying to adjust it to your taste with different kinds of Norwegian aquavit, but for those of you outside of Norway, here is what is supposed to be the original recipe. Make sure that all the ingredients are ice cold.

Stir and serve in brimful shot or aquavit glasses.

I will always remember the sparkle in your eye when you looked up at us after the first sip to see our reactions to the current mix.

Spring has bounded in and the snow has melted faster than anyone has expected. Access to the hayloft in the barn has been blocked by hard packed snow which has fallen from the roof during winter. I knew there was lots of interesting things to take pictures of there, but I dreaded climbing ladders with photo equipment to get there.

Last week end I was able to press the barn doors slightly ajar behind the mound of hard packed snow and got in to see all the old machines and other equipment which has been stored up there for years and years.  It always surprises me to see how beautifully things were made even back then. In our arrogance we tend to think that we invented good design, but they certainly new how to create beautiful things in the past as well.

Just look at the fantastic colors and the design of this roller, 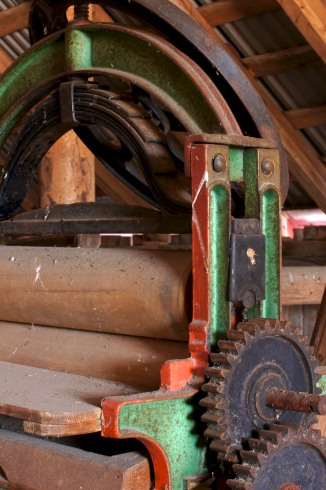 and how age has worked on the colors, making them even more beautiful.

See how the iron is bent to form this lovely figure attaching the wood to the iron. 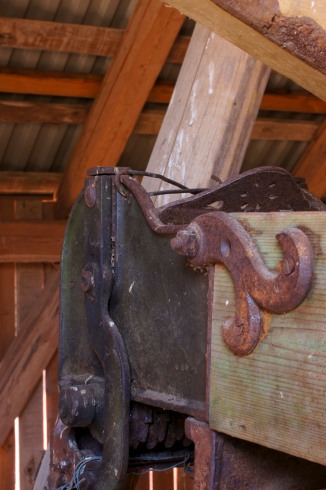 Look at the lovely iron work on the trestle carrying the old sewing machine and how the sun shining through the slats of the walls creates a lovely pattern on the floor.

This wheel is about a meter and a half in diameter. I really wonder what it was used for.

The hay wagon has not been in use for at least 80 years and still the grass huddles close to its wheels. The swallows have been flying in and out  of the barn, their droppings unfortunately creating a mess.

Tucked away in a corner is an old machine of sorts, the burlap which was placed over for protection has gradually slipped way, uncovering muted colors and beautiful designs. 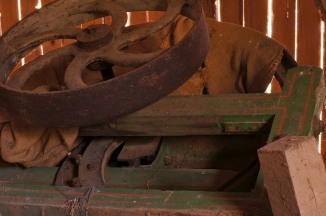 We find it hard to disturb these things and will most probably leave them here for the next generation to come and admire them. All these things carry with them the history of the place and we feel we need to give them due respect.